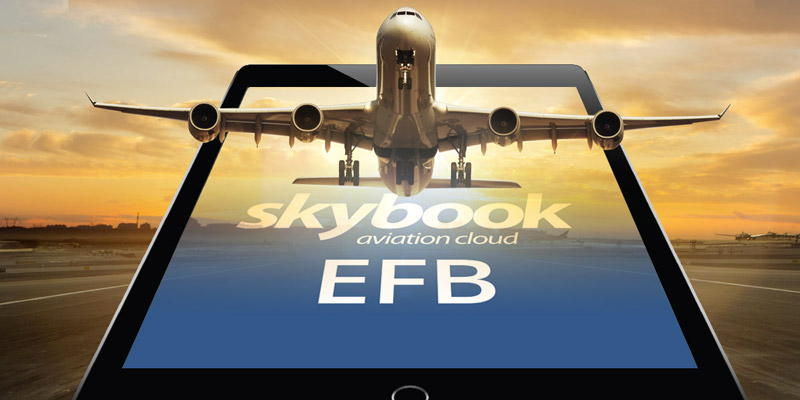 V1.73.71 of the skybook Electronic Flight Bag app is available for download

As you may have read in our Ground Portal overview, the latest skybook update has gone live with particular focus on ETOPS, our PDF based briefings, oceanic entry and exits points and a number of aspects within the skybook EFB in order to deliver some priority requirements for skybook users and to also ensure our modules are evolving ahead our revised EFB application later in June.

Here, we’ll break down each of the release items in the skybook EFB application:

When selecting a voyage from the Load Existing Voyage or Load Locally Stored Voyage screens, the OFP number and Dispatcher name (for the initial sector) is now visible alongside the chosen voyage.

The voyage selection screen within the EFB application has been enhanced to show more flight information along with the ability to record flights that have not been flown. 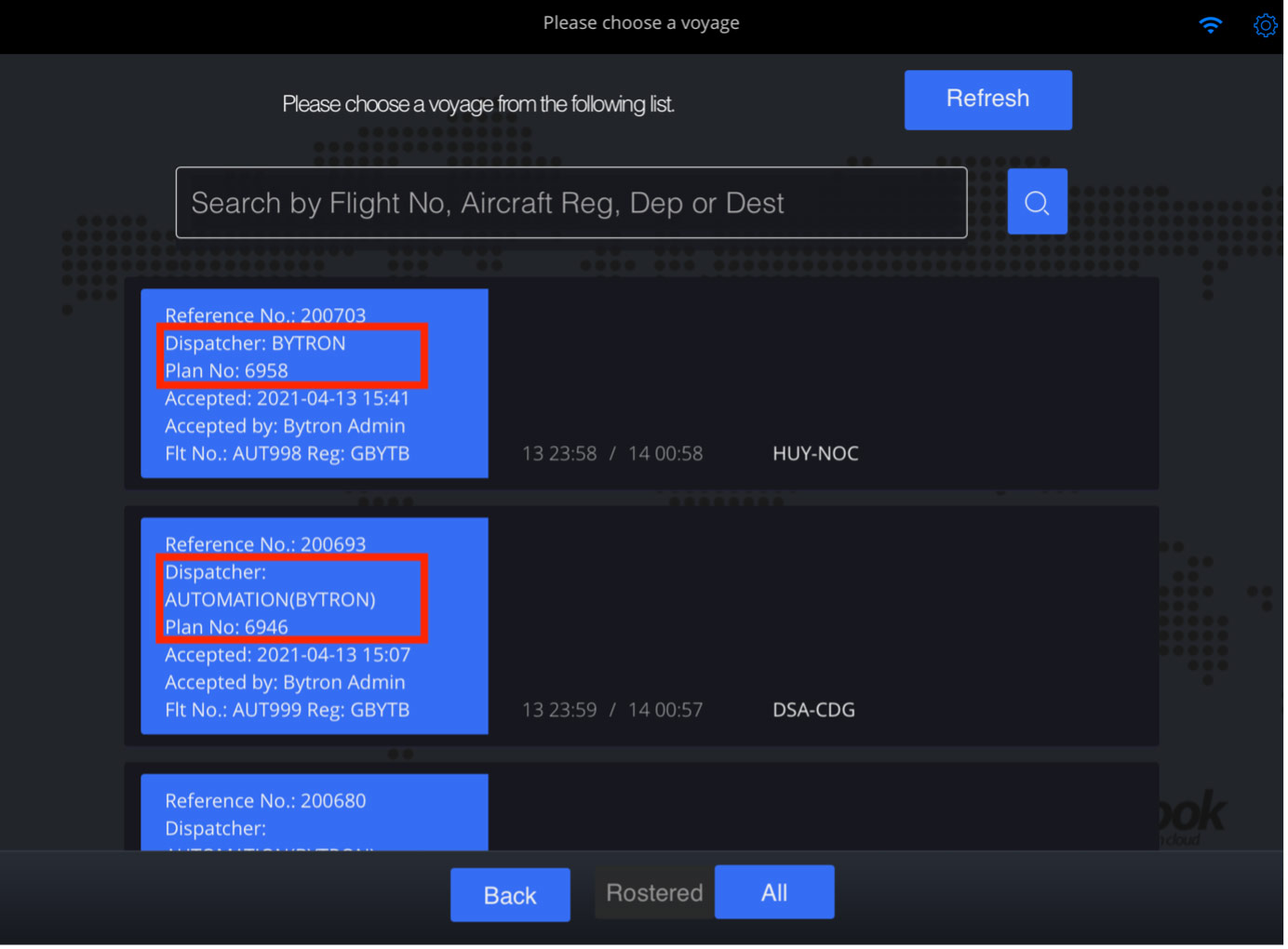 This information can also be found alongside flights in the Incomplete Voyages screen.

There may well be situations where a flight has not been flown and when this happens these flights can be easily marked in skybook at ‘not flown’ for audit purposes. When a flight is marked in this way it is removed from the Incomplete Voyages list.

An incomplete voyage can be defined by the following parameters: 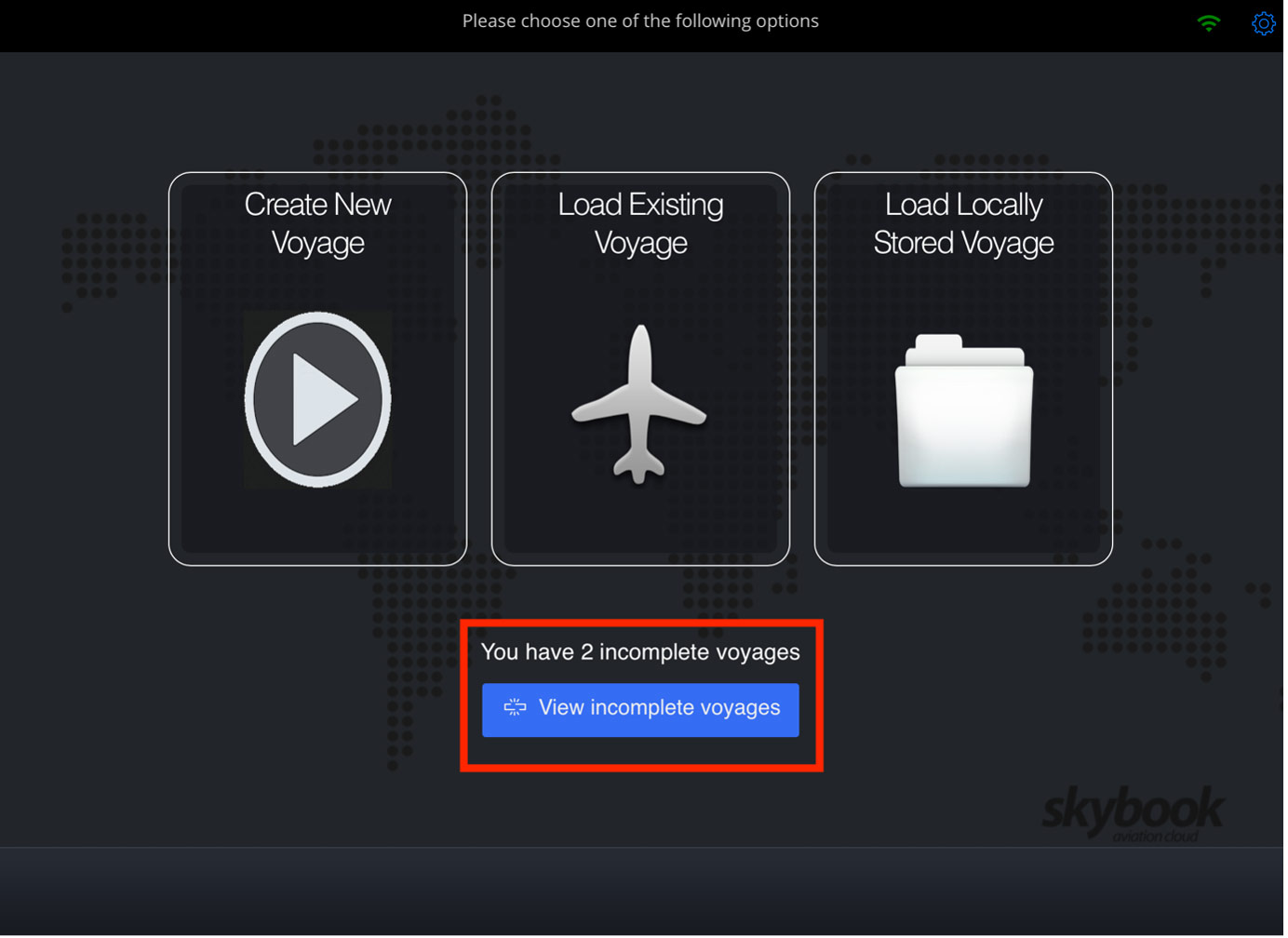 The Incomplete Voyages screen is shown and any incomplete voyages are displayed. Tap the Ellipsis button next to the chosen voyage: 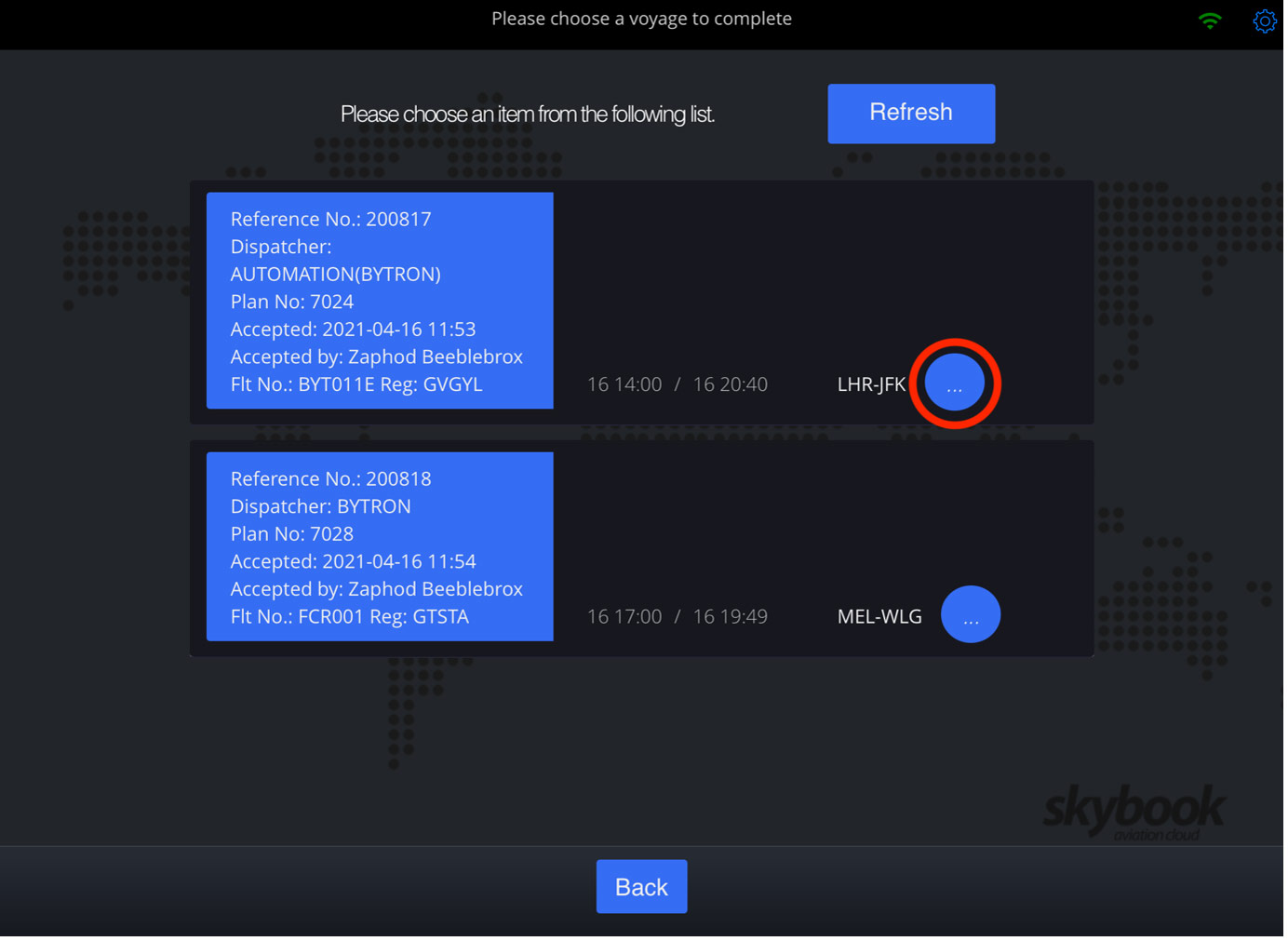 The pop-out menu is shown where you can choose to either Open the voyage or mark it as Not Flown. 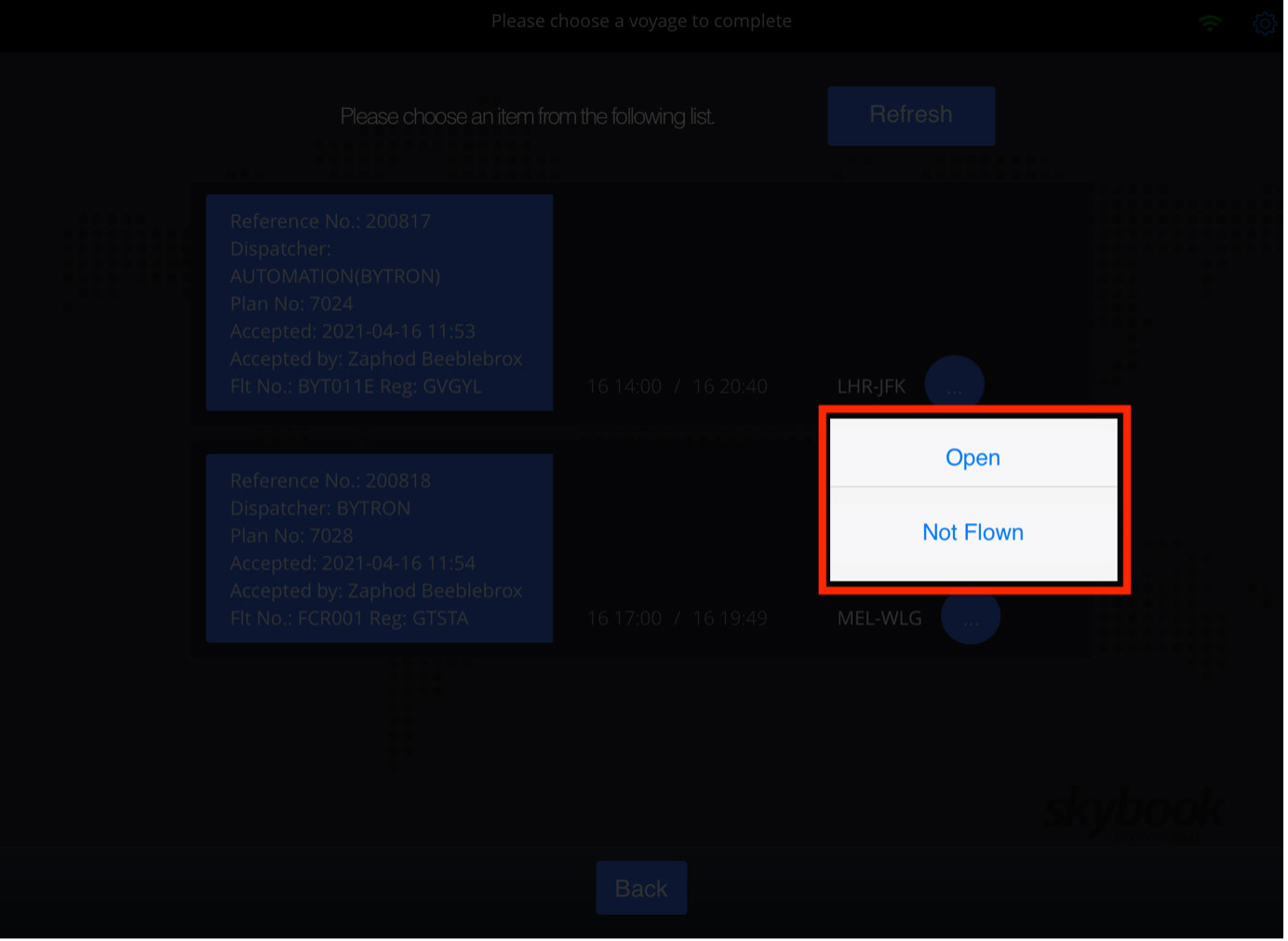 If you choose to mark the voyage as not flown, you are presented with a prompt. Tap Yes and the voyage is removed from the Incomplete Voyages screen: 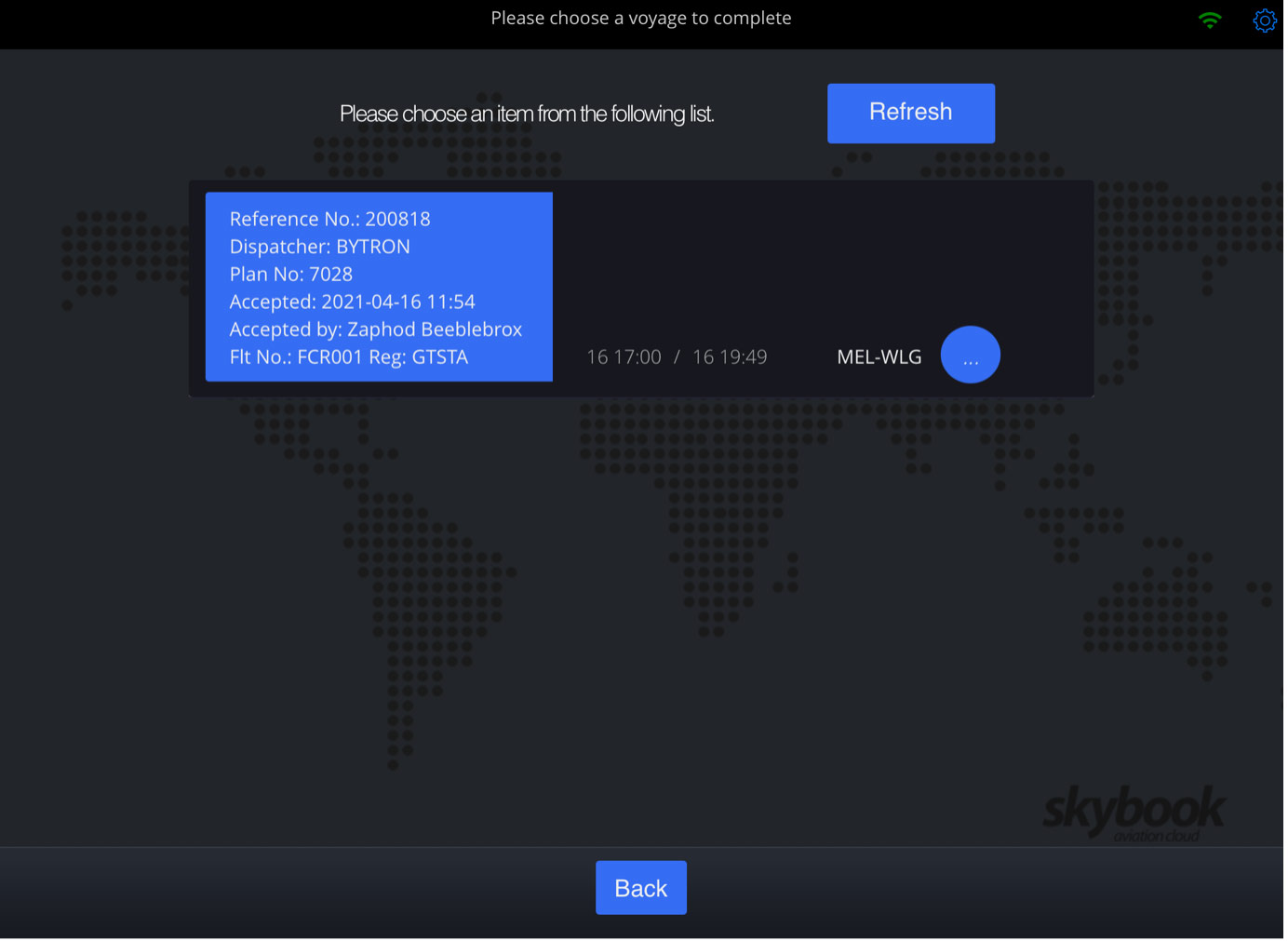 Additionally, the Flight Data Summary in the skybook Ground Portal will reflect this and show that the flight was not flown, along with the user details and date actioned: 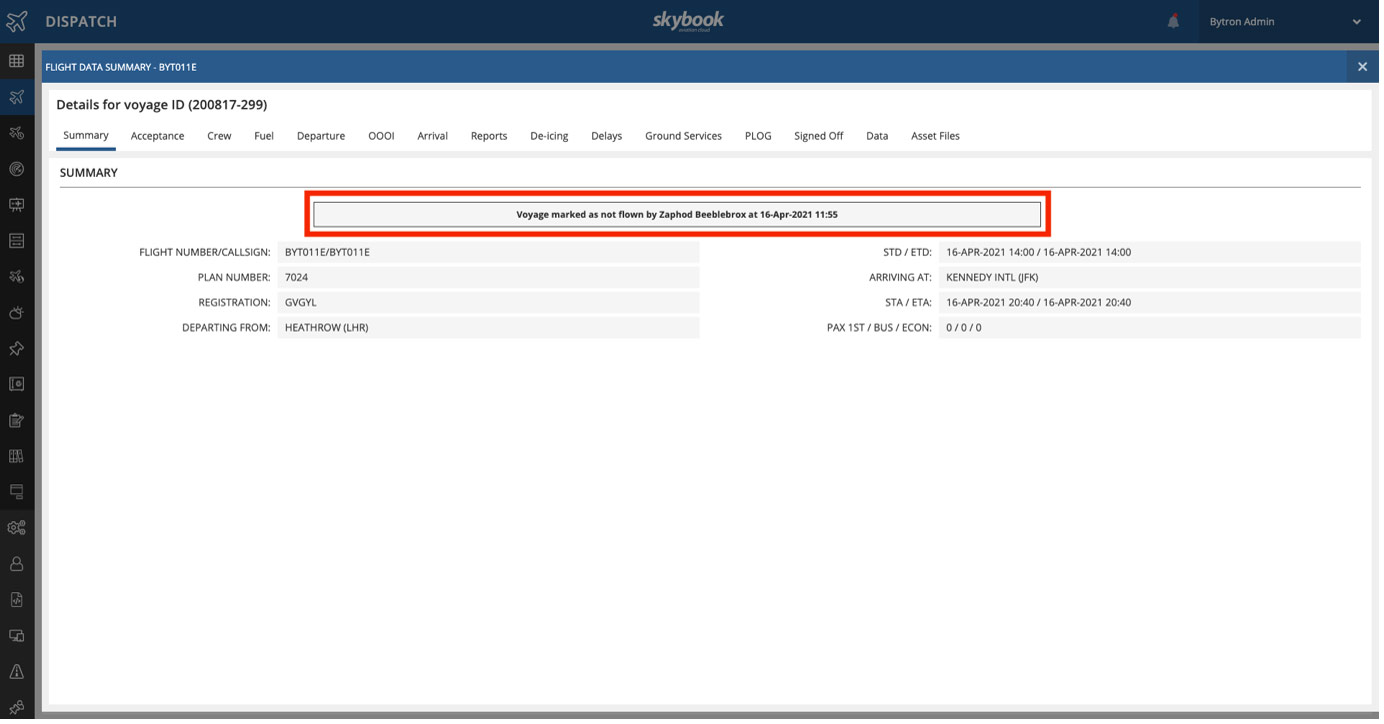 Crew members added to a voyage will now be correctly ordered according to rank and the ability to record in-flight rest has been added.

Crew members are assigned to a flight via the Crew option in the dispatch navigation menu within the skybook Ground Portal. 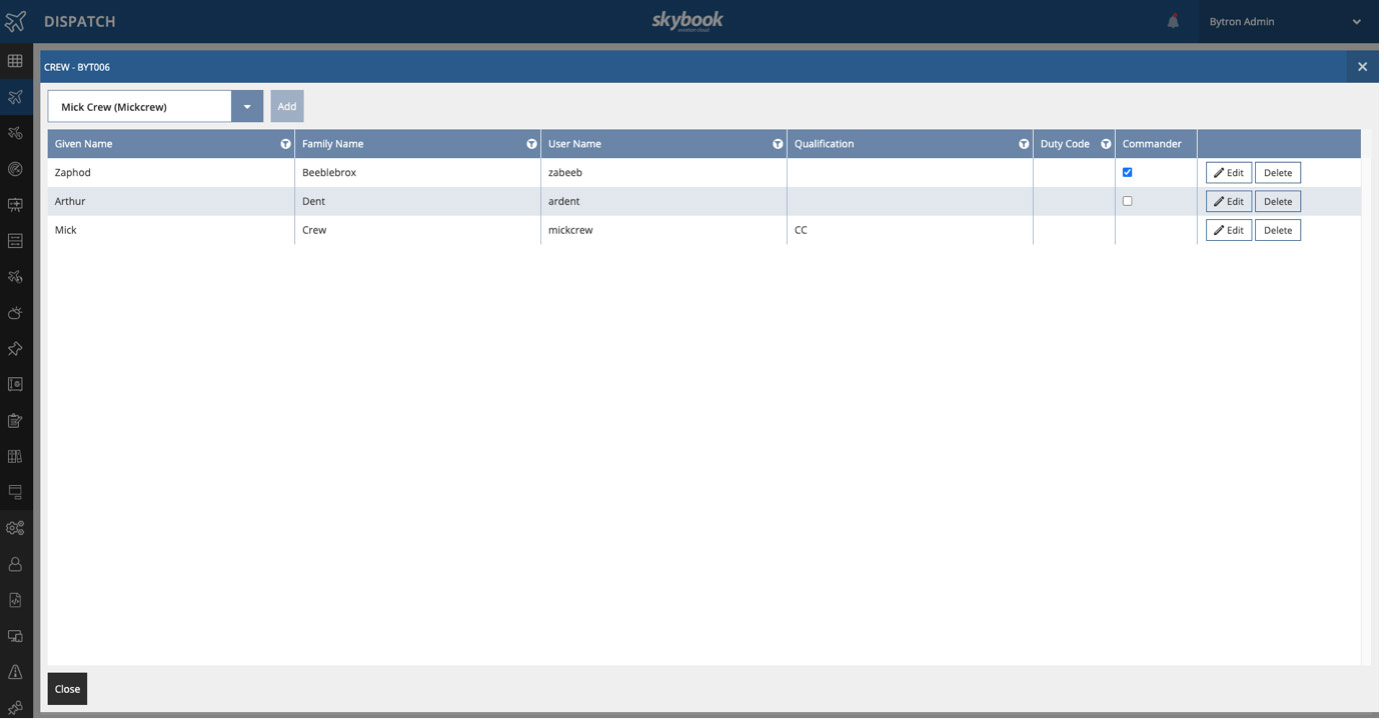 When the voyage is loaded on the skybook EFB and the sector has been accepted, tap on the Crew module to view crew members that have been assigned to the sector.

Crew members will now be listed in order of rank: 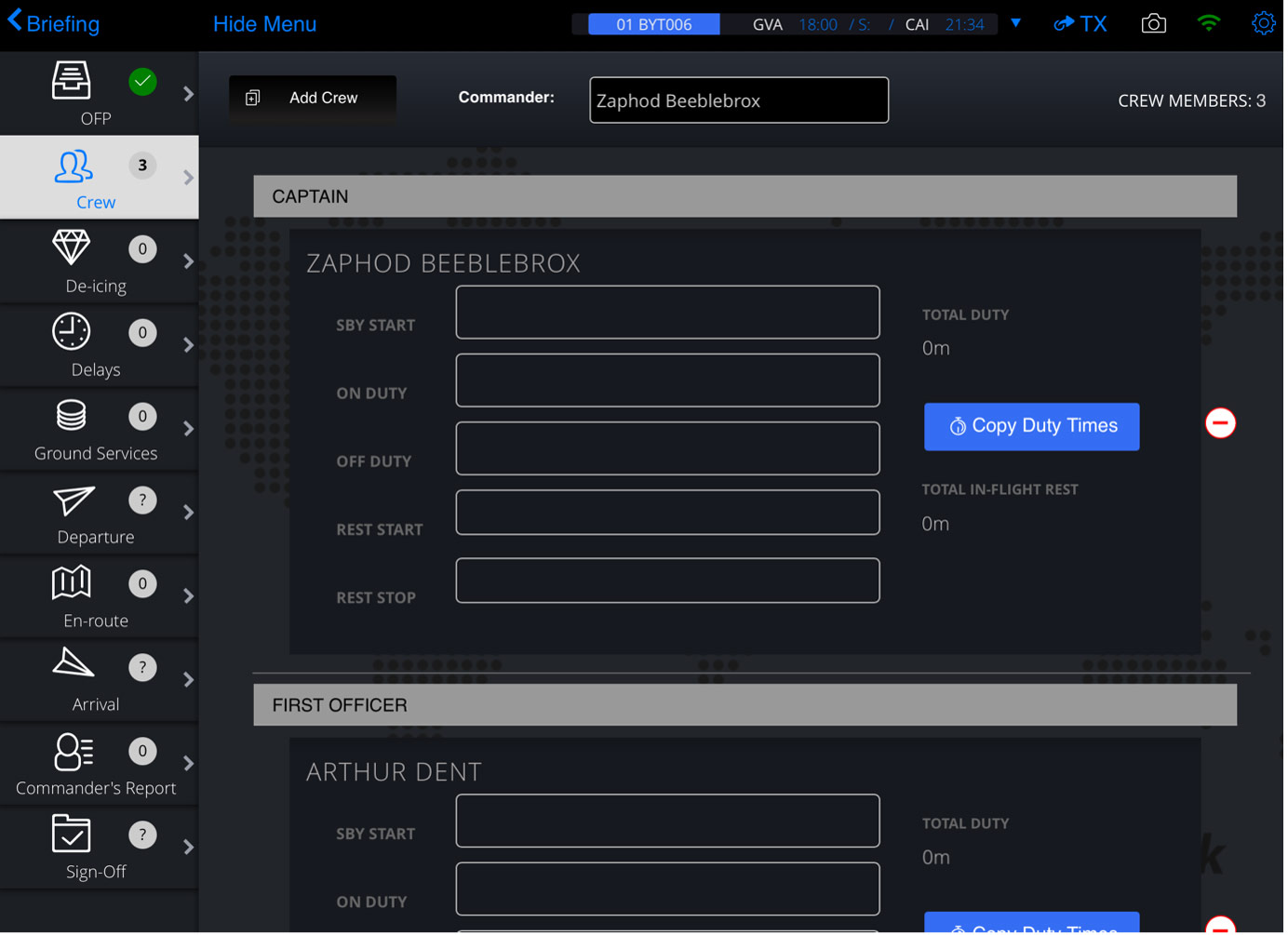 You can now enter in-flight rest time information for a given crew member via the Rest Start and Rest Stop fields: 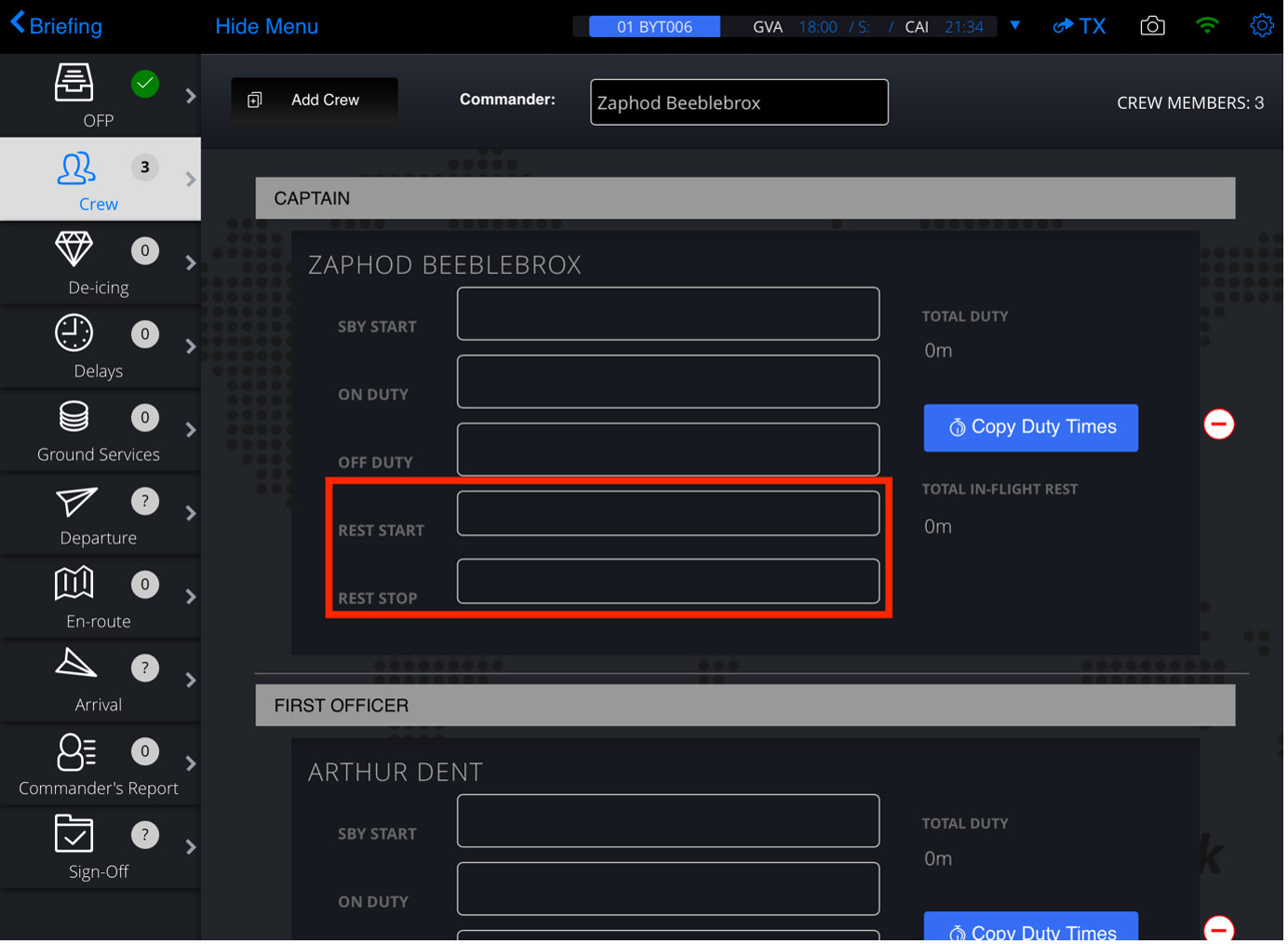 Tap on either the Rest Start or Rest Stop fields to enter the relevant time: 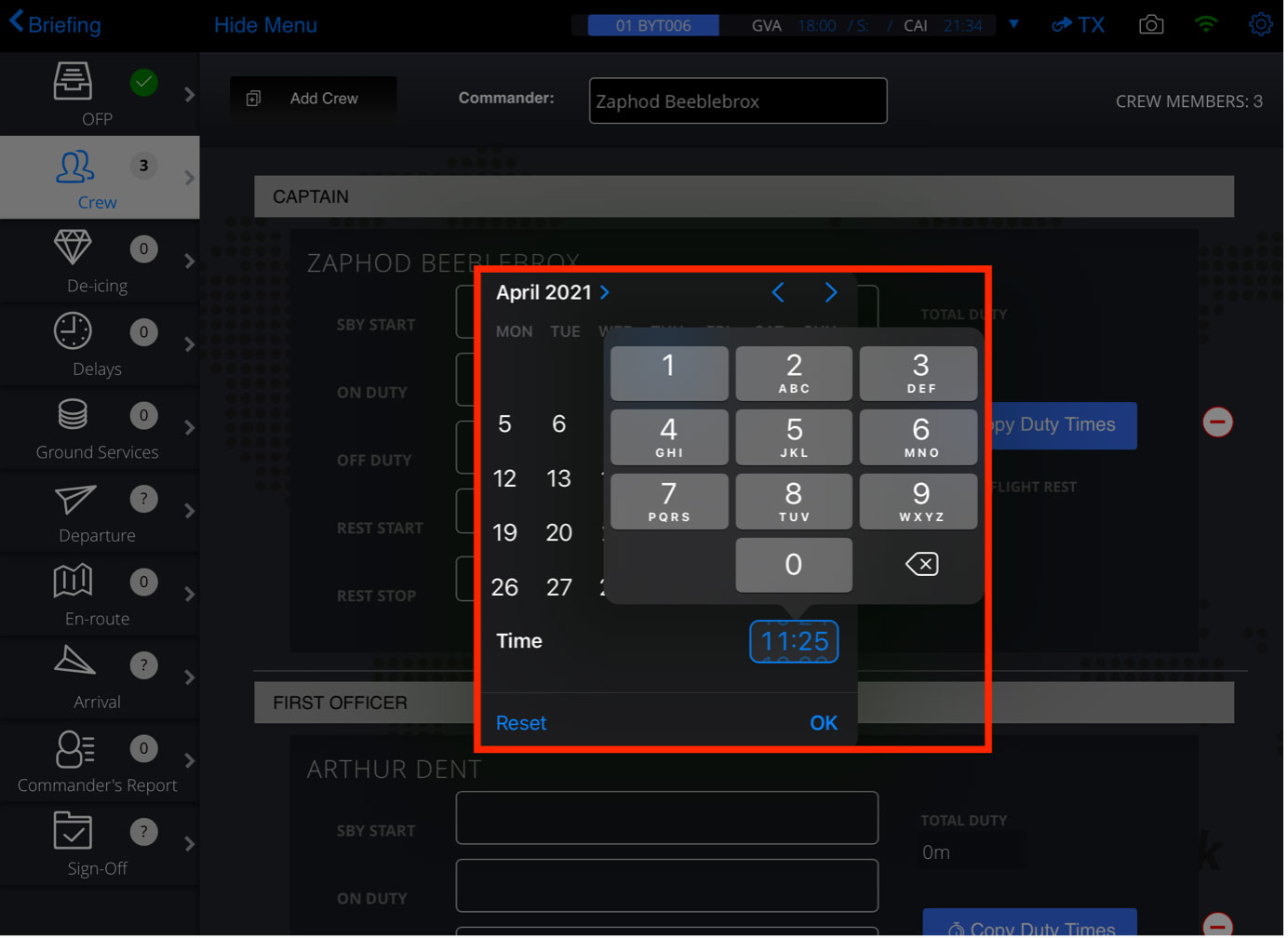 The total in-flight rest time is displayed to the right of the fields: 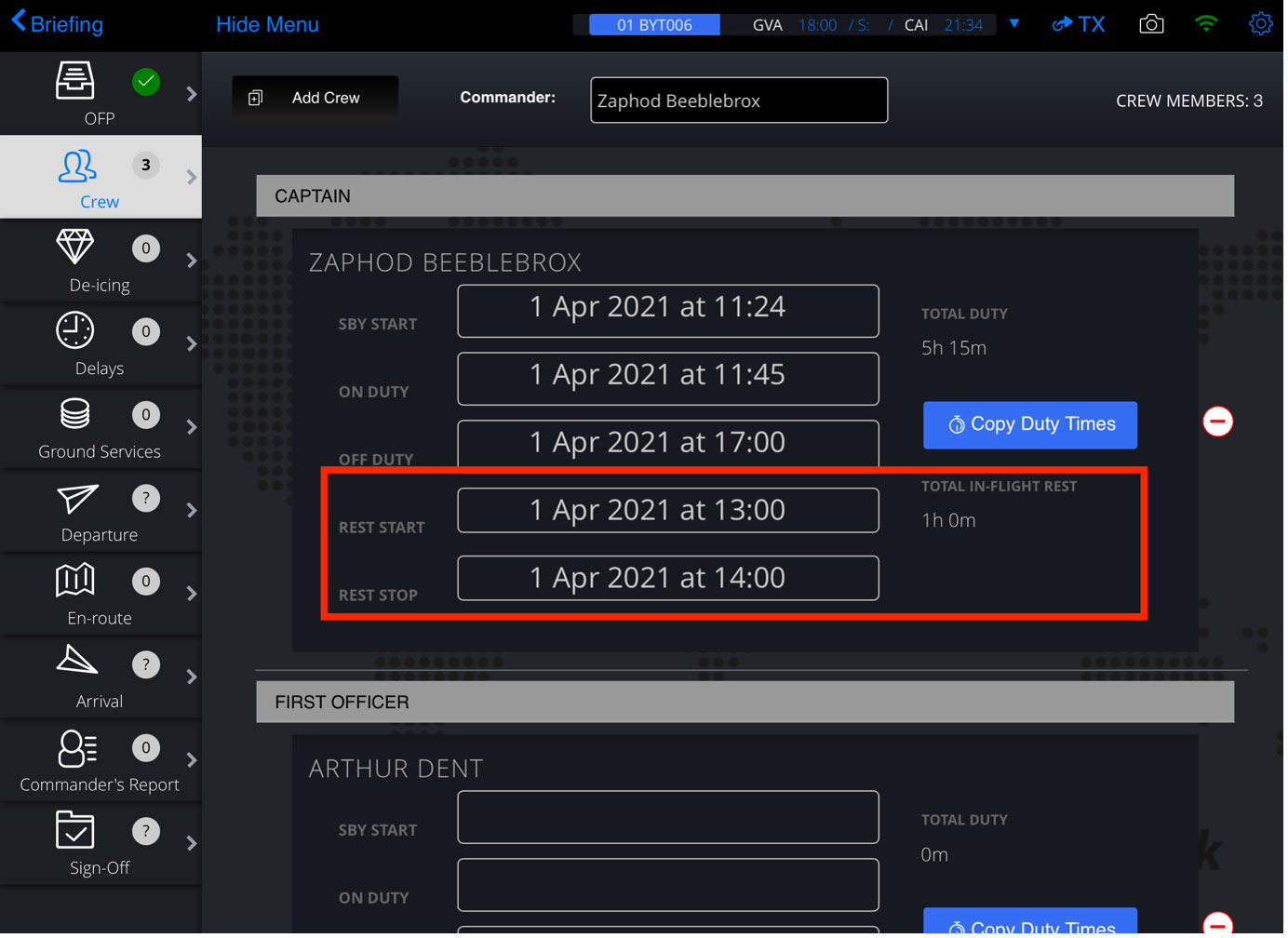 Following transmission of data (either manually or by signing off the sector), you can view any in-flight rest information that has been entered within the Crew tab of the Flight Data Summary for the voyage in the skybook Ground Portal. 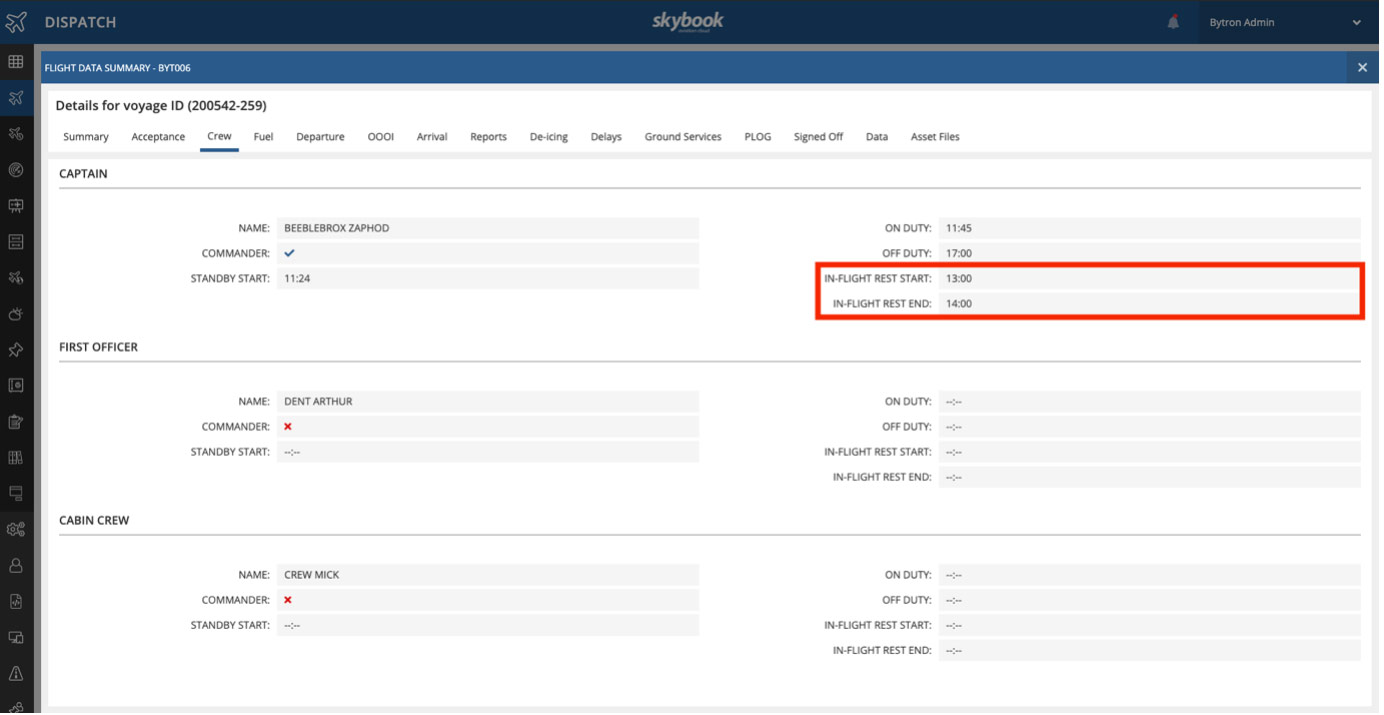 The ability to record actual take-off fuel weight and send this information to a third party has been added, a new table allows passenger information to be inputted, and the option to add a pre-departure signature is now available.

A new field can be added to the Departure module which allows you to enter the actual take-off fuel weight following push-back, taxiing, and wheels-up events.

Note: This feature is not part of the default skybook EFB configuration. Please contact your skybook account representative for further information.

The Fuel Take-Off Weight field can be configured (via an operator setting) for either kg or lbs dependent on customer preference and is a non-mandatory field. 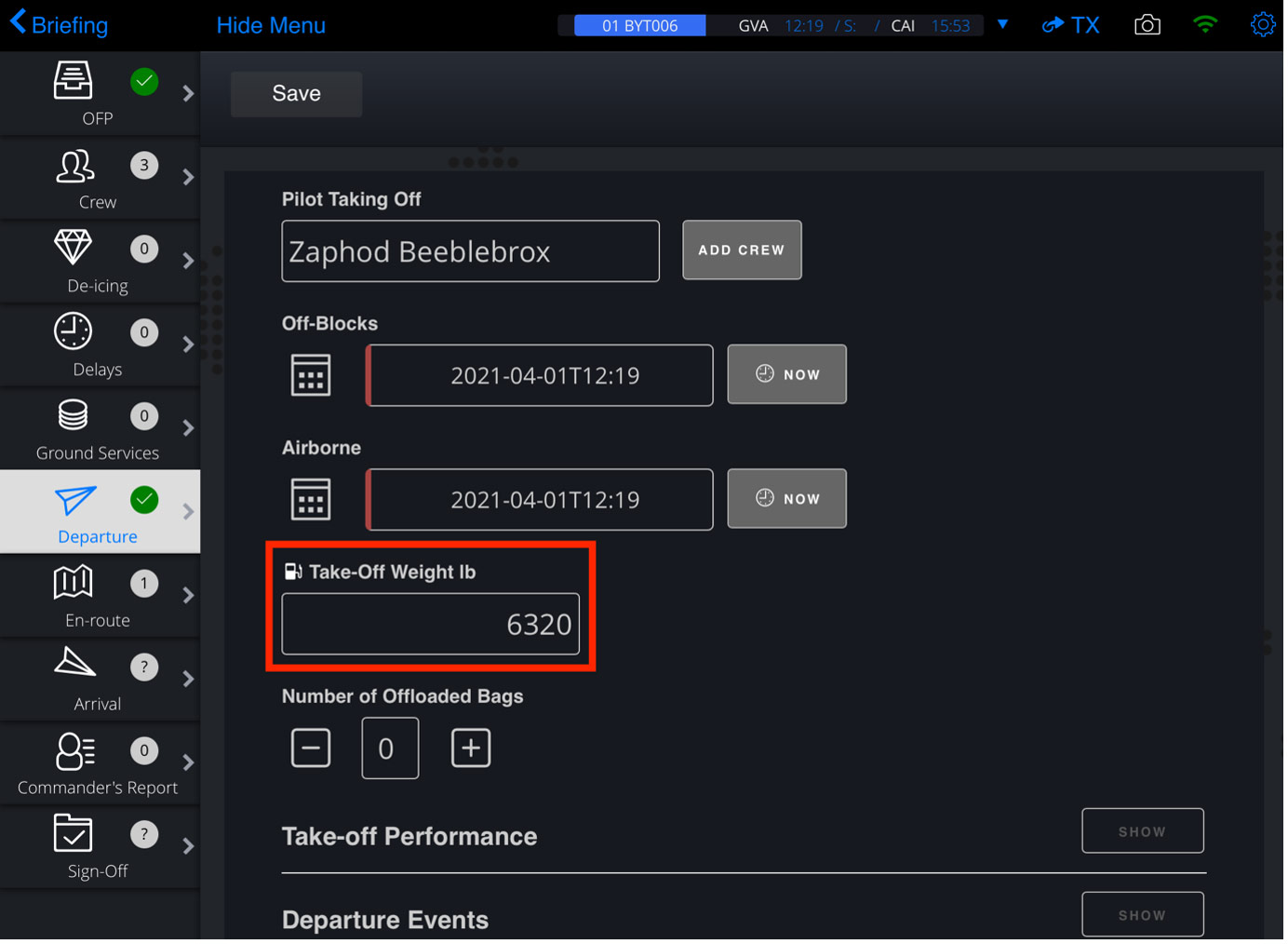 Following transmission of data (either manually or by signing off the sector), you can view the fuel take-off weight figure within the Fuel tab of the Flight Data Summary for the voyage in the skybook Ground Portal. 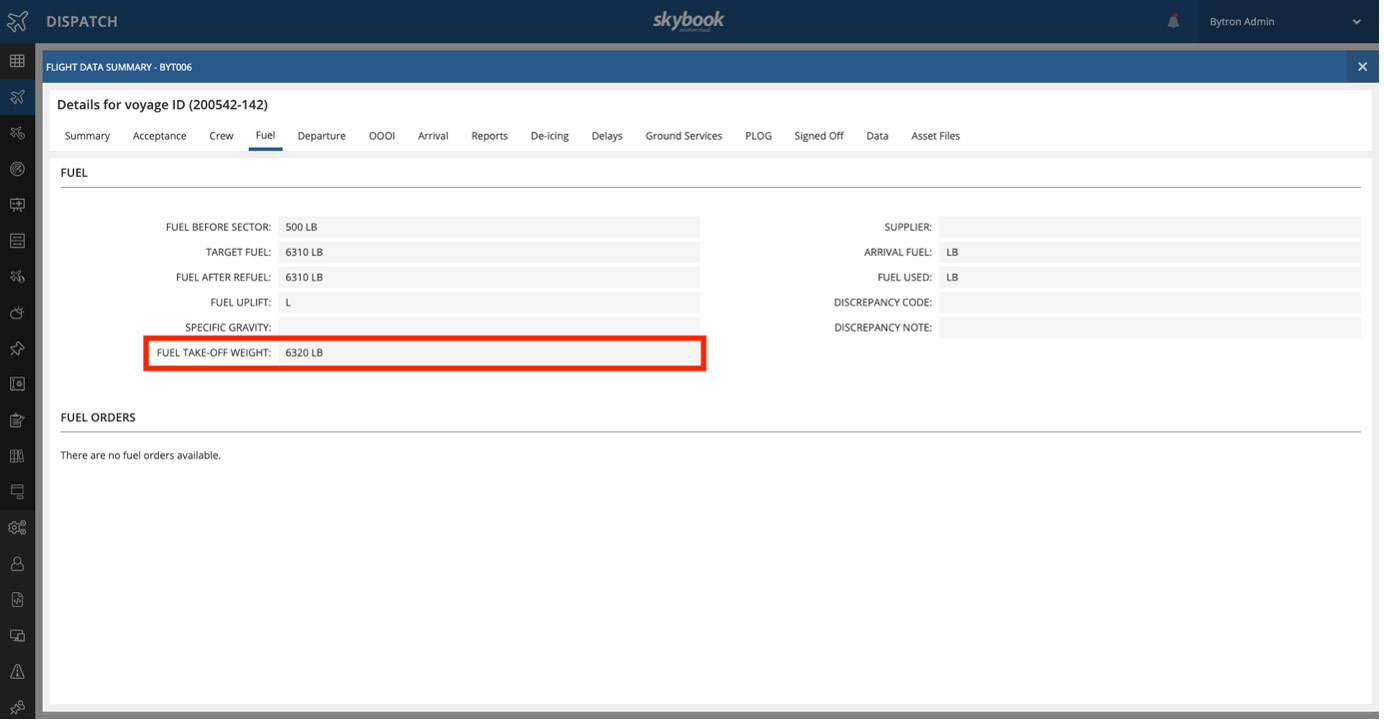 Note: Additionally, where required, users of BlueOne software integration can have this information forwarded.

The ability to capture passenger details is now available in the Departure module. It is now possible to enter passenger and passenger class information. 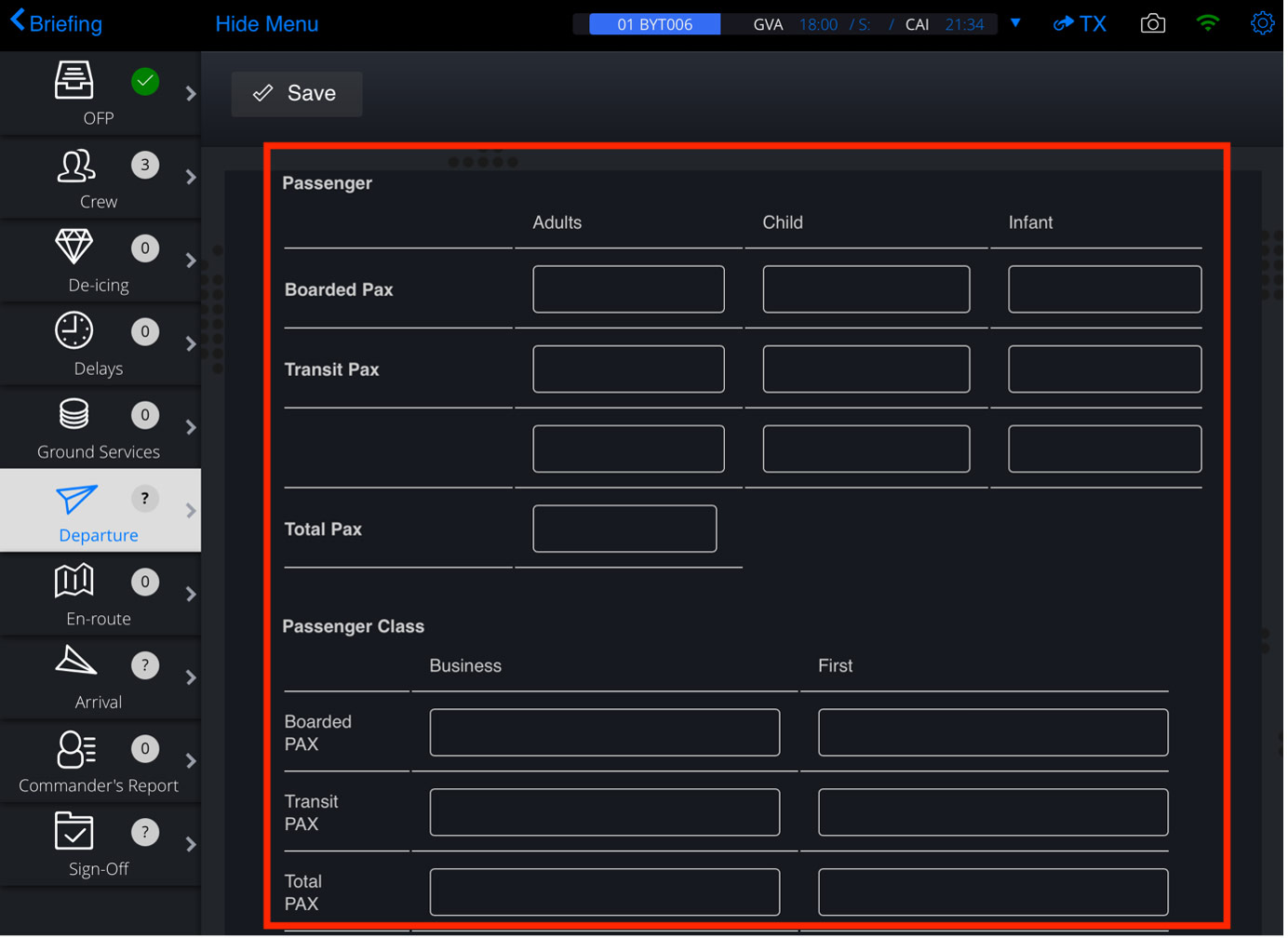 Note: This feature is not part of the default skybook EFB configuration but can be enabled upon request.

The passenger loading table can be configured in a number of ways (via operator settings) depending on the level of detail required when capturing your passenger information.

All configurations show fields for Boarded Pax, Transit Pax and calculation of Total Pax with the available columns being determined as below:

You can enter passenger quantities by tapping on the required field and entering a number. The total passengers will be automatically calculated and shown in the Total Pax field. 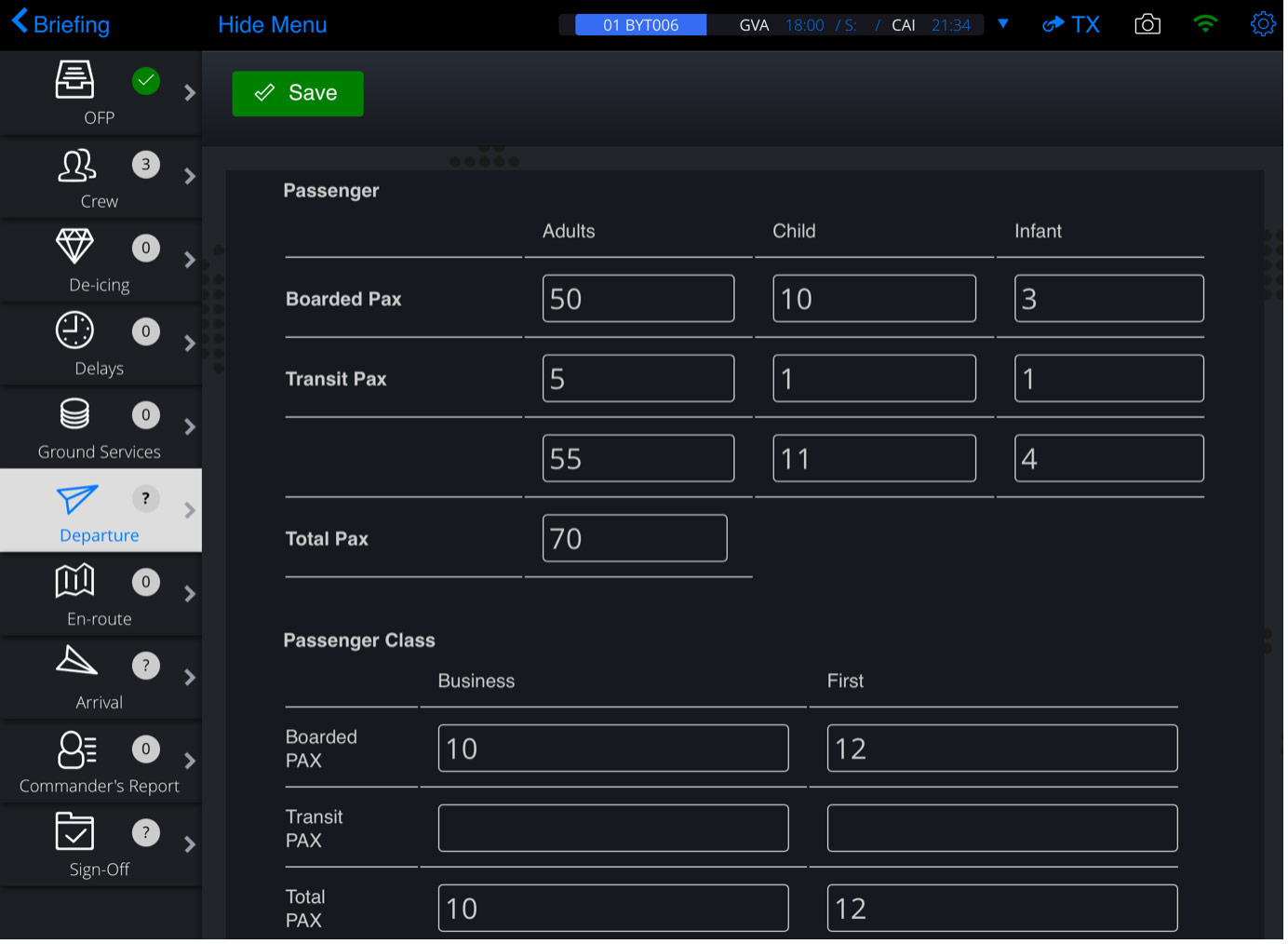 Following transmission of data (either manually or by signing off the sector), you can view any passenger information that has been entered within the Departure tab of the Flight Data Summary for the voyage in the skybook Ground Portal. 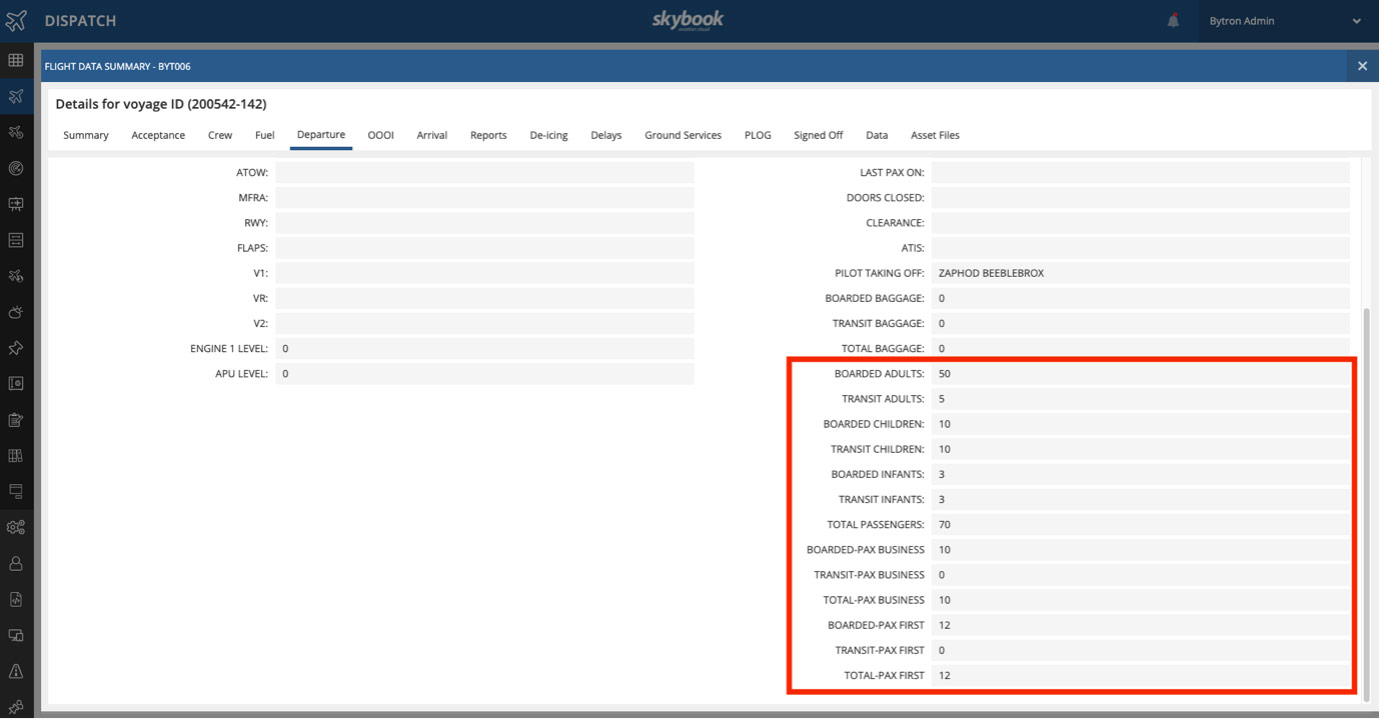 A pre-departure signature field can now be added to the Departure module in order to accommodate users who may, for example, need to sign off final checks as part of their company policy prior to departure.

Note: This feature is not part of the default skybook EFB configuration. Please contact your skybook account representative for further information.

The pre-departure signature field is located between the Dep Clearance and Pilot Taking Off fields: 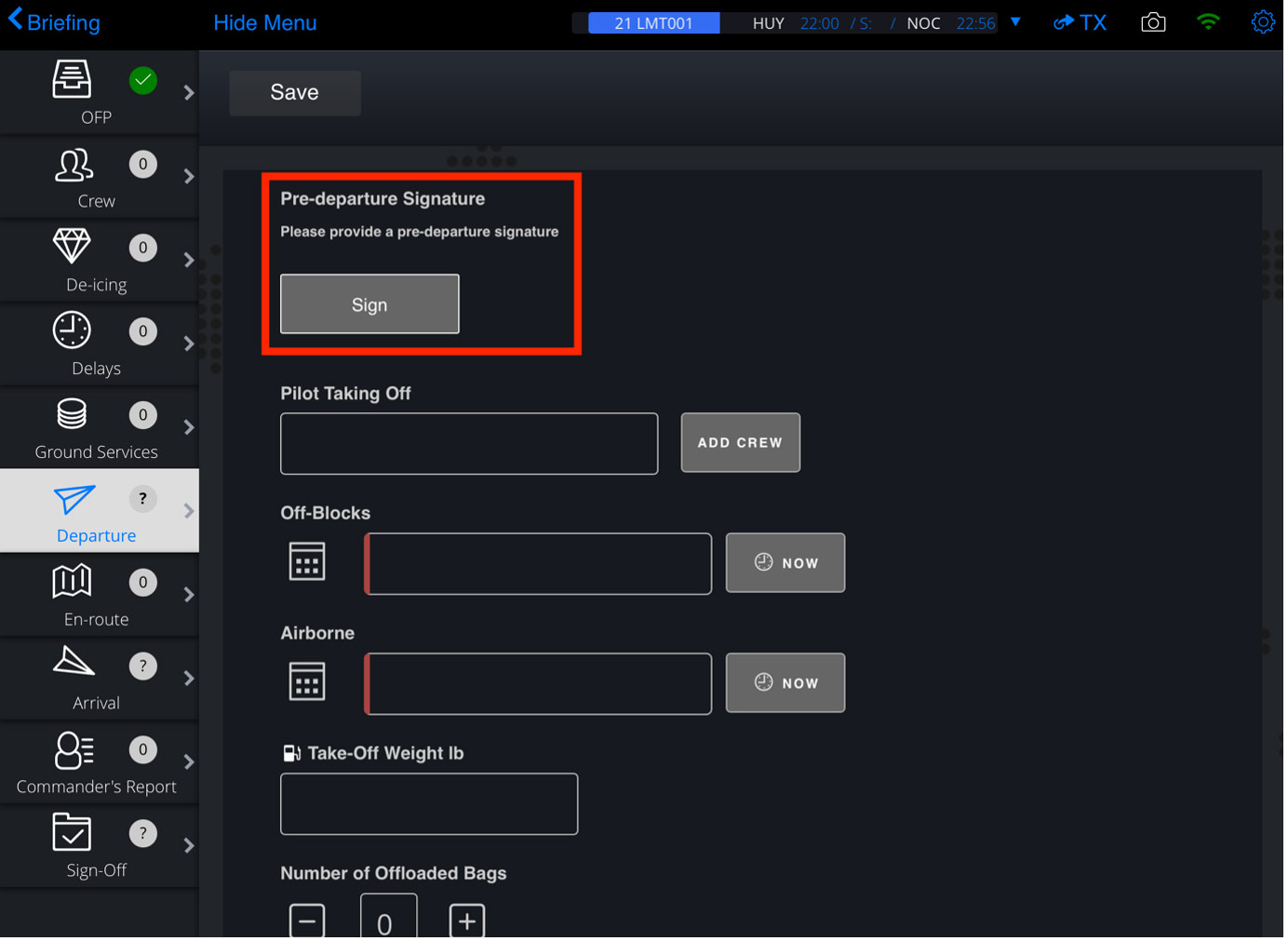 Tap the Sign button to open the pre-departure signature field: 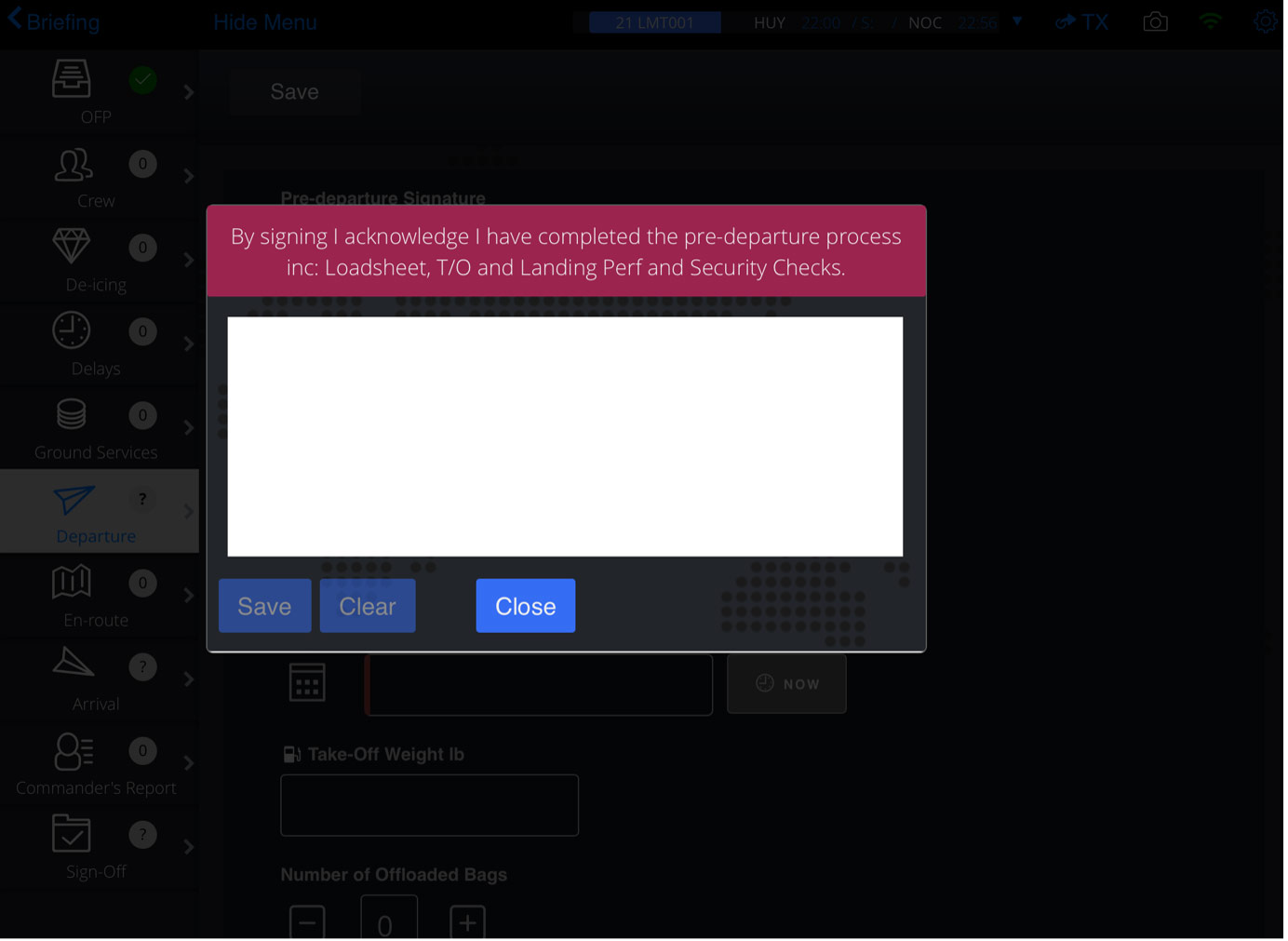 Add your signature to the scribble-pad field and tap the Save button to save the inputted signature. You can clear the signature by tapping the Clear button: 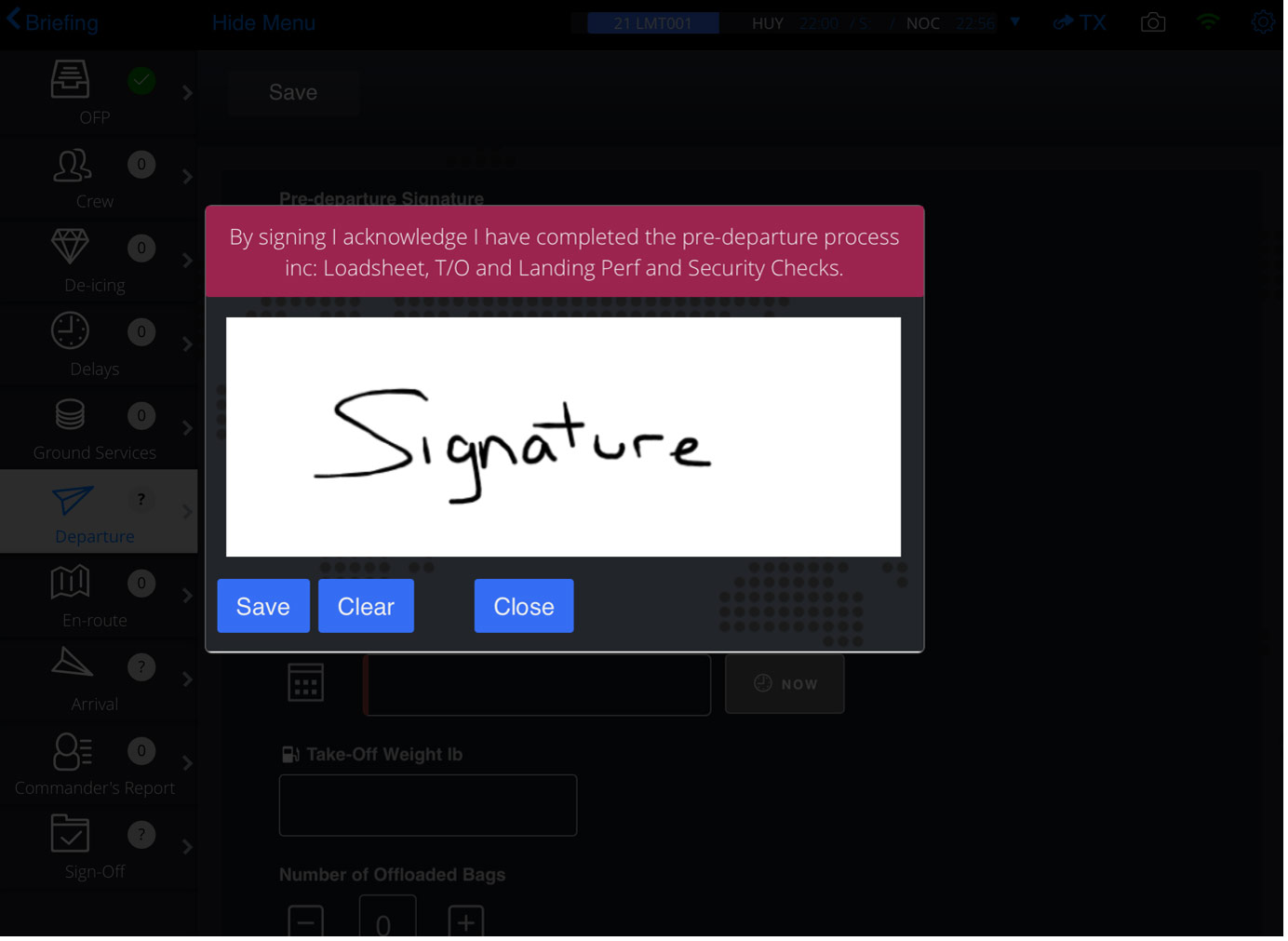 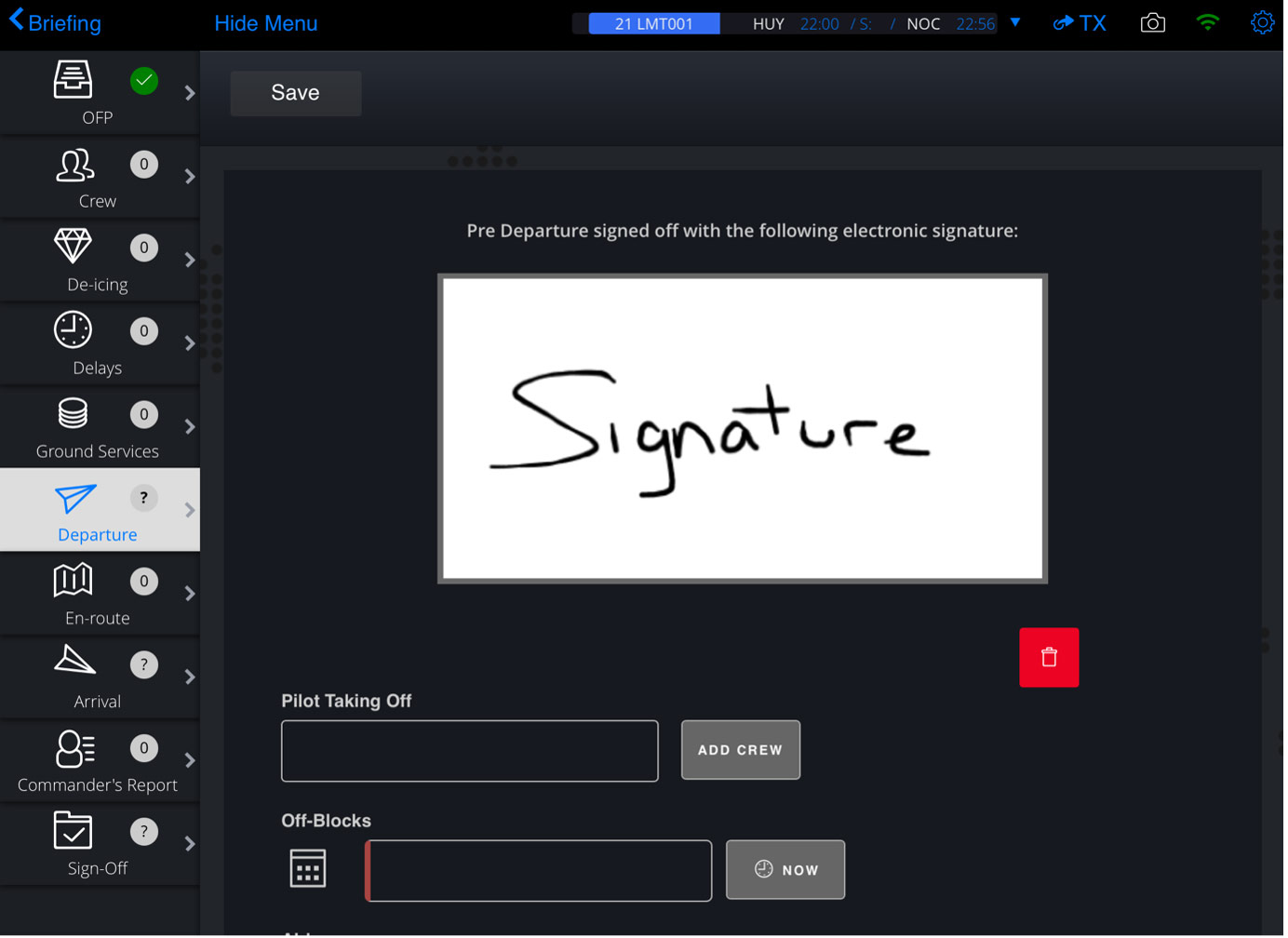 Following transmission of data (either manually or by signing off the sector), you can view the pre-departure signature (including who signed and the associated timestamp) within the Departure tab of the Flight Data Summary for the voyage in the skybook Ground Portal. 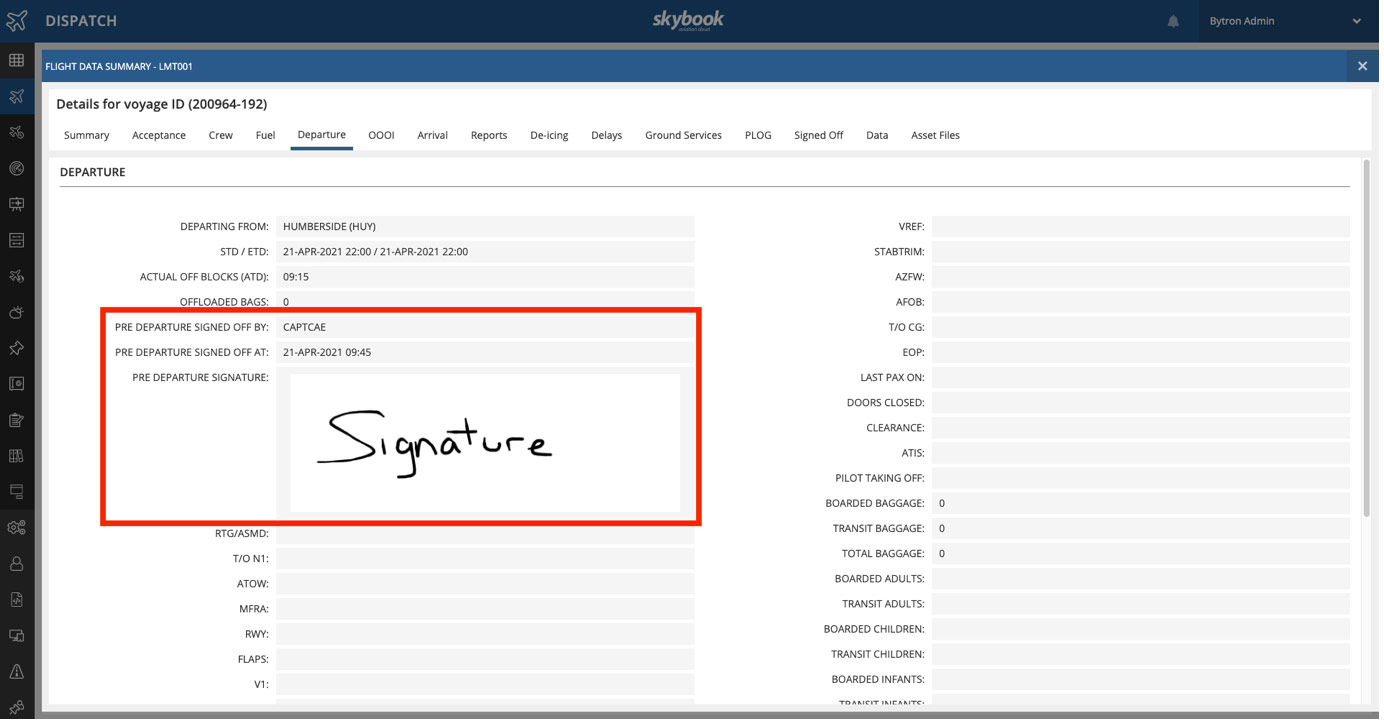 It is now possible to have the Actual Fuel On-board (AFOB) figures be calculated to show projected fuel, rather than the default planned fuel figures taken from the OFP.

Note: This functionality is enabled via an operator setting. Please contact your skybook account representative for further information.

You are able to manually enter AFOB figures during a flight by tapping on the Time, Fuel and Level Entry button next to a given waypoint (as shown below): 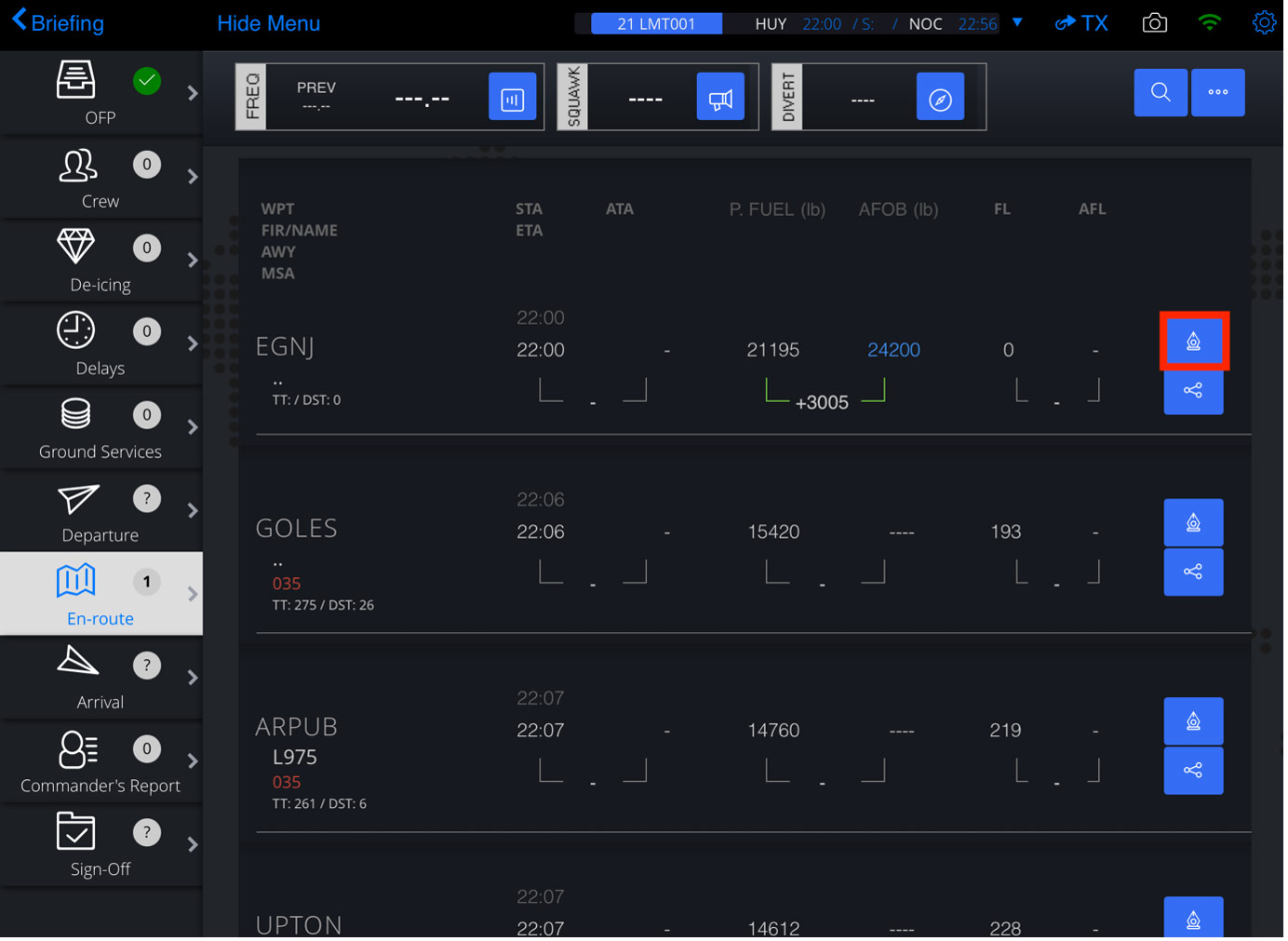 The Time, Fuel and Level Entry pop-up is displayed for the chosen waypoint: 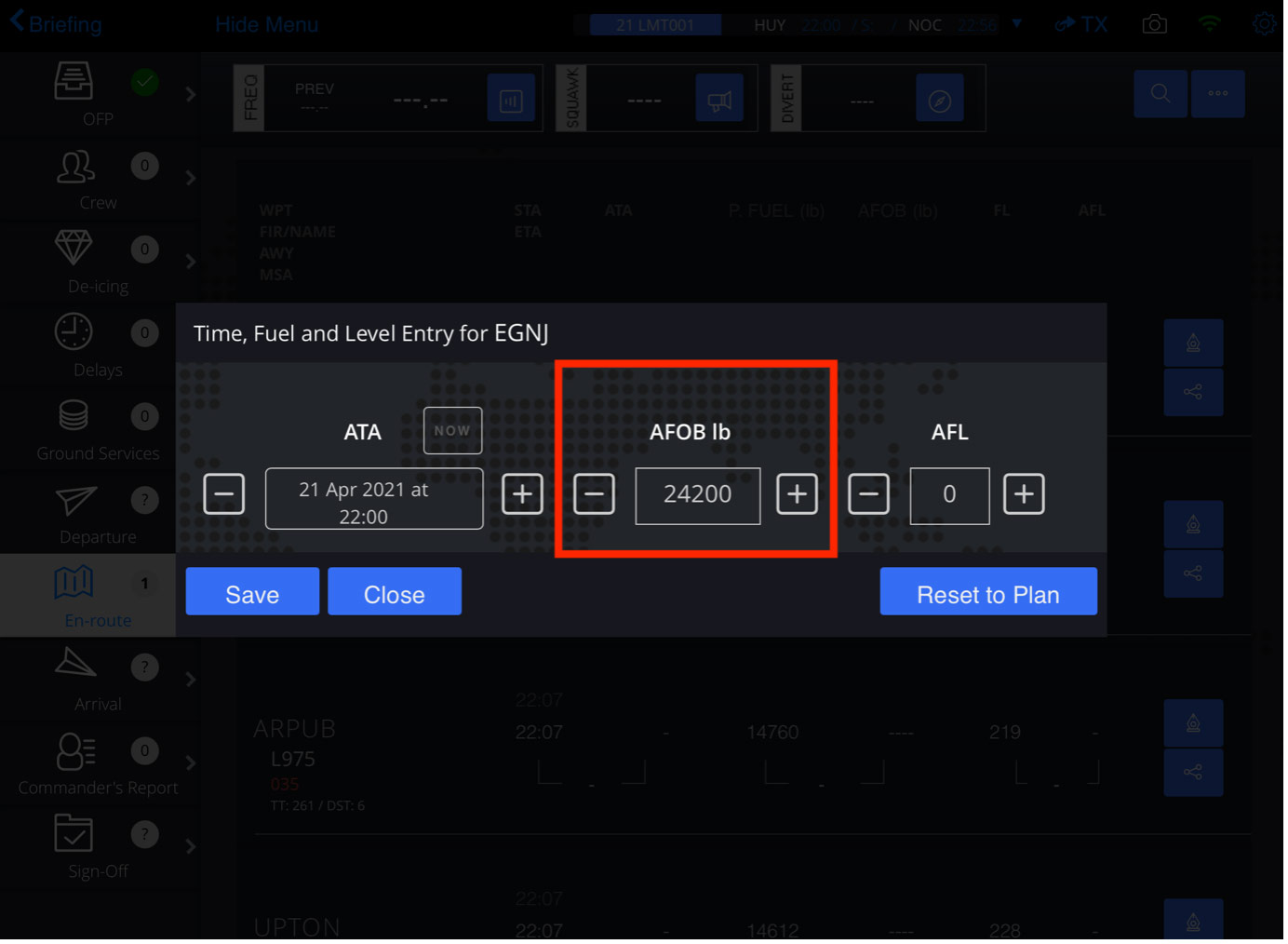 You can use the Plus or Minus buttons or tap on the AFOB field itself to manually enter a new figure and then tap the Save button to save the new figures.

The waypoints that follow the manually adjusted waypoint will now display the projected actual fuel figure in the P.Fuel column instead of the planned fuel figure. 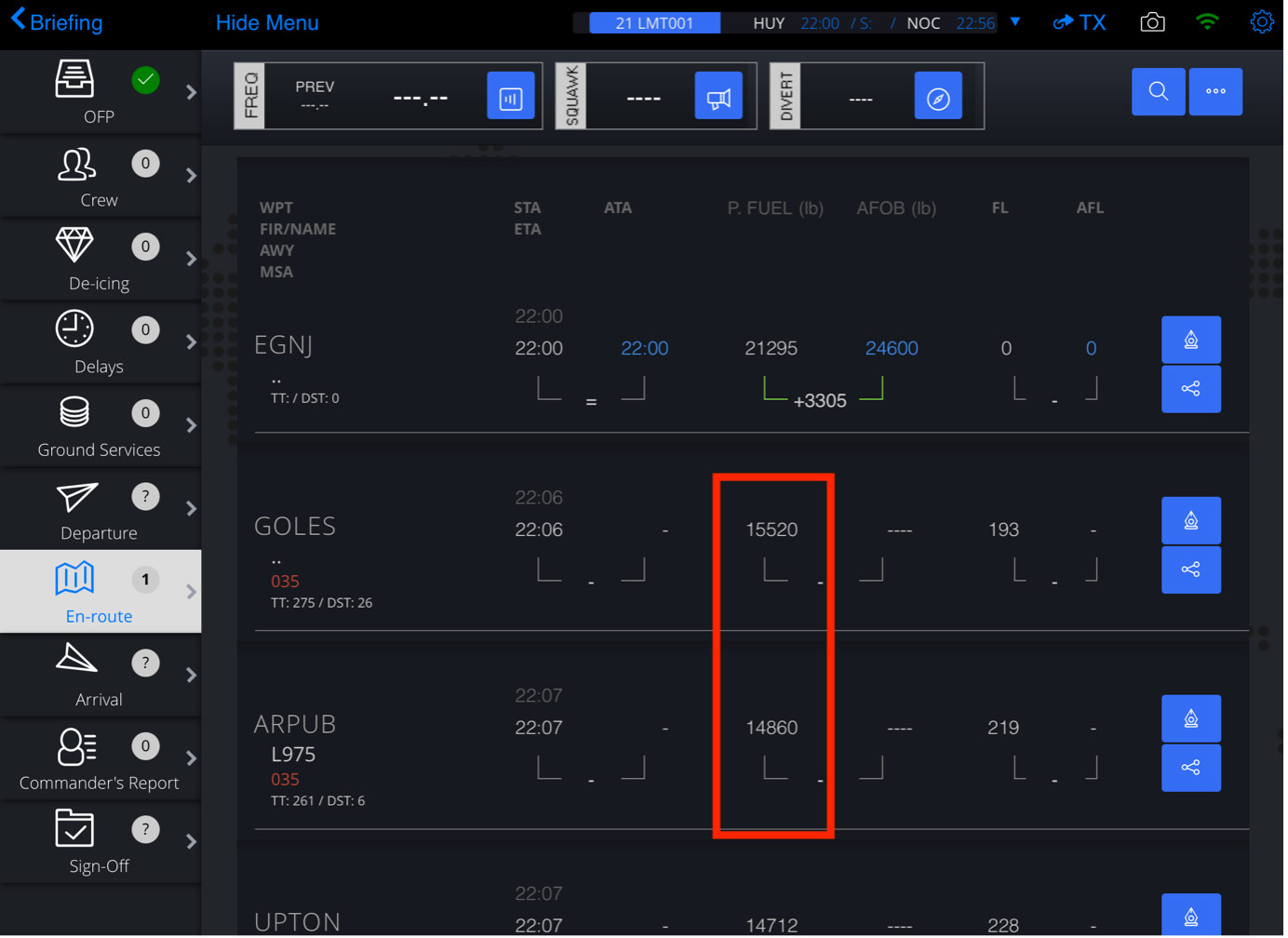 Voyage data can now be shared across devices. (SKY- 1120)

It is now possible to synchronise voyage data between devices by utilising the new Share Voyage functionality.

Note: This functionality is currently only available for iOS devices. 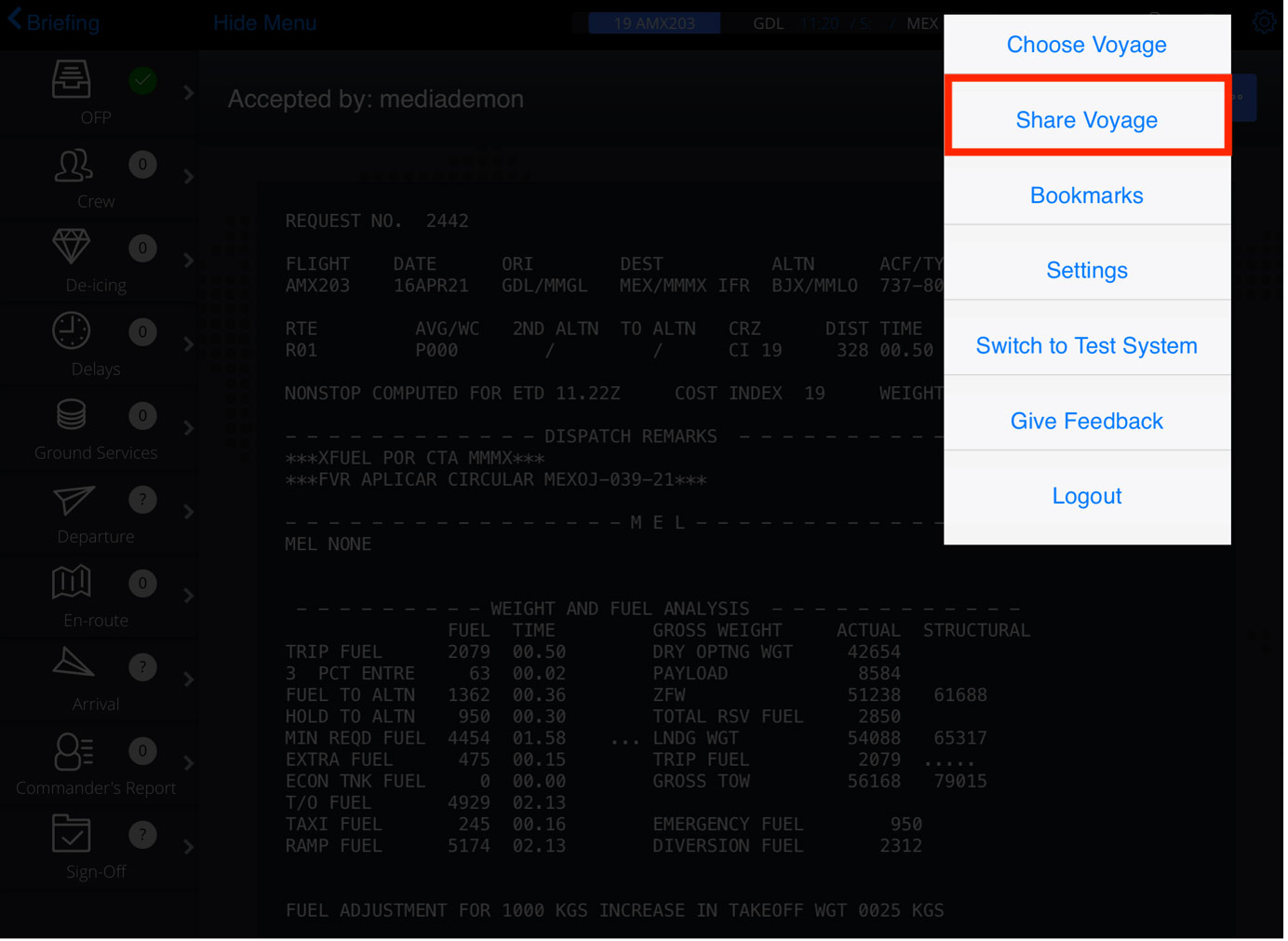 You are presented with your device's sharing menu. Tap the AirDrop icon: 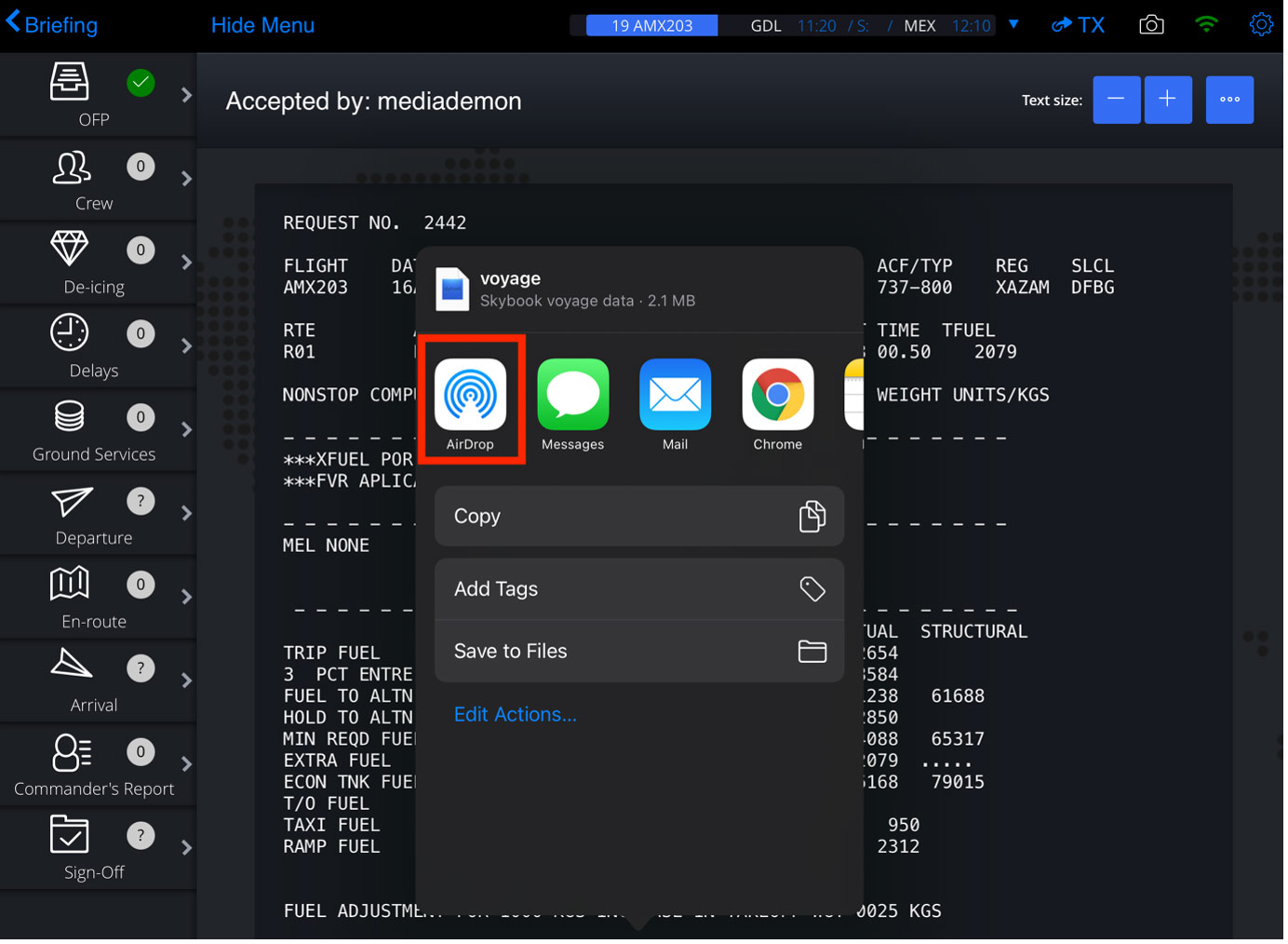 You are now able to select the device with which you wish to share voyage data: 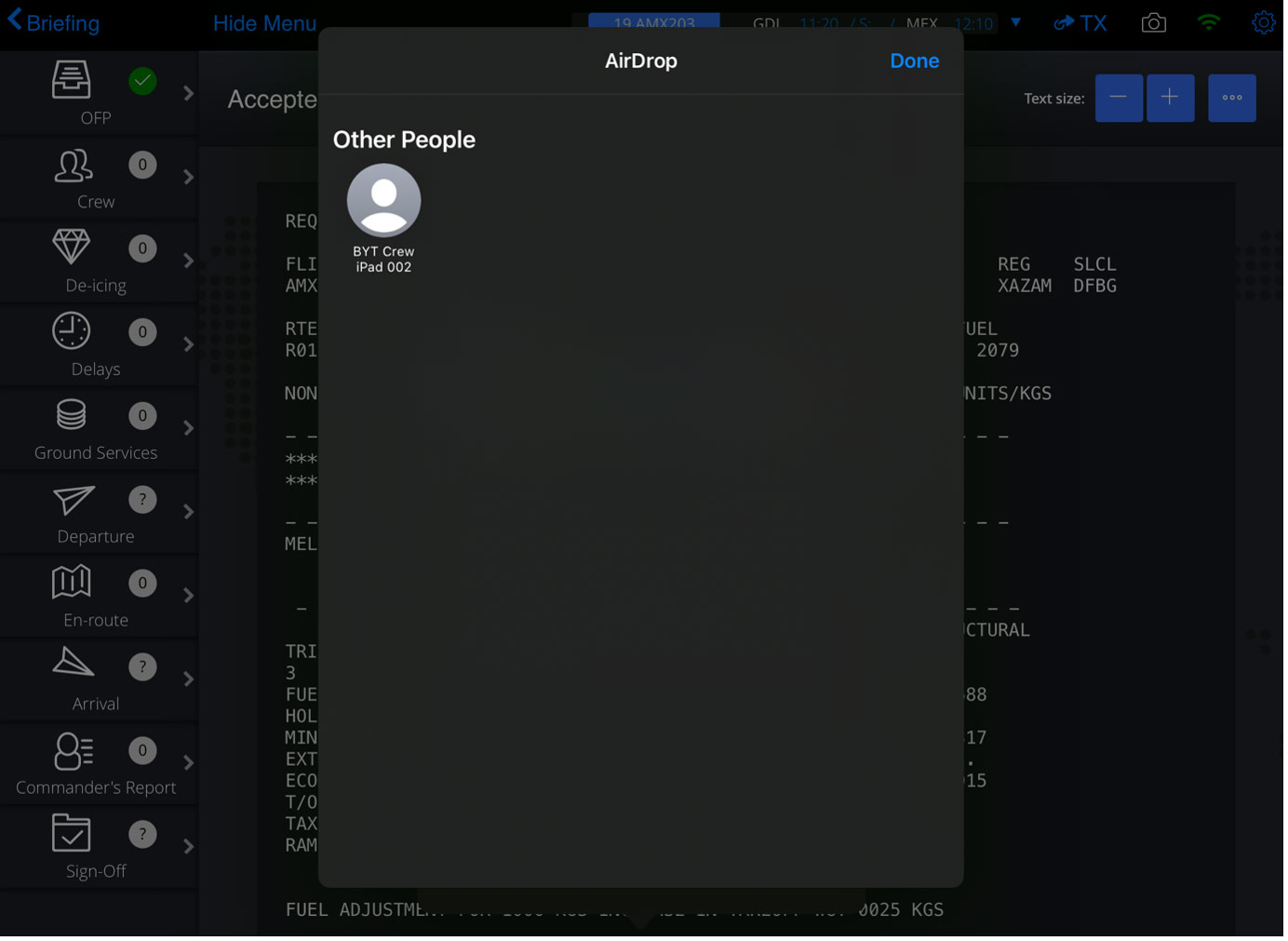 The receiving device will need to accept the shared voyage when prompted.

The voyage data will then be available on the receiving device, including any user-inputted data from the sending device.

Note: The device which is receiving the shared voyage data will have any existing data associated with that voyage overwritten.

If you are new to skybook and want to find out more you can email us via info@bytron.aero and a member of our team will progress with your accordingly. It really is that simple.

Get skybook release notes direct to your inbox

Register to receive the latest skybook release notes direct to your inbox for each new release.